Did I ever tell you how much I love “The Golden Girls?”

Yeah, it’s true. From watching new episodes on Saturday nights as a kid with my own Golden Girl Grandmother, to 10 PM re-runs playing in the background as I was getting ready to go out (!!!) in college, to middle-of-the-night programming when I was up with a cranky newborn time and time again, the GGs have always been there for me.

Once at a party about 10 years ago, I even held court for hours acting out scenes from favorite episodes with a group of gay male friends. We took turns playing different parts, but mostly I ended up being Dorothy, the character played by Bea Arthur. Epic party.

When I discovered all of these GG-inspired crafts, it was love at first sight. 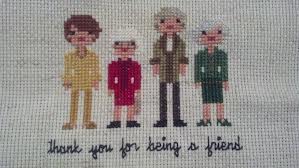 But this is for die-hard fans only: 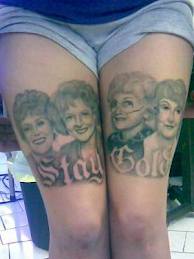 And no, those aren’t my legs.