Can you hear the collective sighs from family and coworkers when they realize they have to share refrigerator space with drinks like this again? 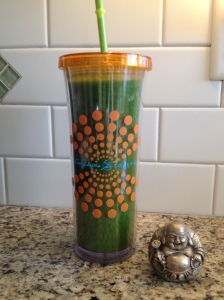 I’ve variously been into juicing for quite a while, usually for a few days at a time. The longest stint I did was during a night float rotation in residency when I subsisted on a daily Jamba Juice and Diet Coke(s) for six weeks.

But that was mostly out of laziness and not about health.

This guy makes juicing seem appealing. His documentary “Fat, Sick and Nearly Dead” chronicles his health journey from zero to hero. It’s hard not to get on board.

What a pain in the arse to grind up pounds and pounds of produce to get a thimble-sized serving of juice. Cleaning it was also a nightmare. There was even a special wrench you needed to remove the razor-sharp grinding blades, and the pulpy bits seemed to be stuck everywhere. It was a thousand times worse than hand washing a cheese grater.

For now, I’m making my concoctions in the old Waring bar blender we got as a wedding gift fifteen years ago. Originally intended for margaritas, I’m repurposing it. It’s doing fine, but I have my sights set on something bigger:

A Vitamix! The Cadillac of blenders!