MGM (6) had to write an essay this week about a famous person for a school unit surrounding historical figures and heroes.

After much gnashing of teeth, we settled on Alfred Nobel.

Why? Because of his storied prizes in categories like Medicine, Literature and Peace?

He was selected because he invented dynamite.

After writing the essay, the second part of the project consisted of making a poster with cutouts for one’s head and hands, and then decorating the poster board with items that the historical figure would have used. 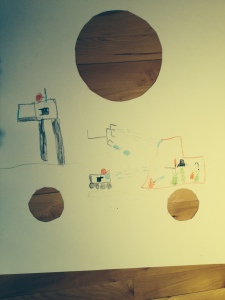 What you’re viewing is a poster board with head and hand cutouts, but decorated with scenes from “Star Wars Angry Birds,” which I highly doubt was something often played by Alfred Nobel.

Bow tie, “Nobel Prize” around neck, and a giant stick of dynamite in his right hand.