Fact: I own waaaaaay too much stuff.

Stuff I don’t even use.

Stuff I don’t even need.

Stuff my kids outgrew, stopped playing with or never liked in the first place.

It’s been building for a while, but over the weekend I reached a point where I was ready to divest of significant property.

I started with my own closet and posted some of the things online that I wanted to give away. Several of my friends responded within a few hours. Score!

I moved on to some storage cabinets in our family room that house (read: are totally stuffed with) kids’ toys. Here I had to be brutal, tossing away freebie plastic figurines and random game pieces and piling up gently used toys that they have simply outgrown.

Tip: strongly consider whether you want your kids involved in this! I chose not to, which is a good thing since they tried to pick through the discard pile later on. No take backs!

But all of this is just the tip of the iceberg. The guest room closet is so overstuffed that it may explode (and it’s a walk-in. Argh). Both kids’ rooms are overflowing. The coat closet where I can’t hang more coats. The basement. OMG. The Basement.

This is going to be quite the project, but I know I’ll be thrilled with the results. 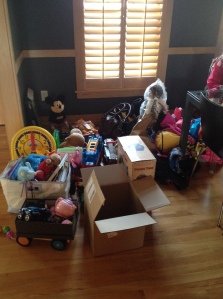 P.S. I am seriously considering hiring a professional organizer to jump start this project. I’ll keep posting about the progress. Wish me luck.