I was surprised to learn this week that two retail haunts on my usual rotation were going out of business.

A quick check showed they’re already gone. The link above just gets you to a brief “We’re Outta Here!” message.

And in the Number 2 spot: Piperlime.

While I didn’t hit up this site as much as the other brands under the Gap umbrella (Athleta and Banana Republic are particular weaknesses), they would occasionally run some decent sales on brands that usually weren’t discounted (Clare V., I’m thinking about you).

Still, I miss you both already.

First world problem, I know, but all of my Apple products are dying at once.

It started with my phone, an out-of-date and uncool iPhone 5.

The battery life is rapidly dwindling, even with no apps running the background. I’m getting about 5-6 hours, tops, before it gets down to around 20% and then abruptly shuts off.

But it seems to be a common issue.

My five-year-old laptop’s battery is also waning, giving me maybe two hours of power even if it’s fully charged.

There spinning rainbow icon is also popping up everywhere these days. It’s unpredictable enough that I can get some work done, but it’s also becoming so frequent that it’s slowing me down time and time again. 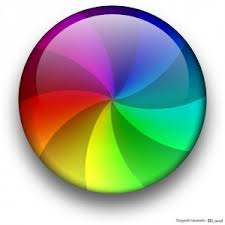 And now my iPad is getting in the game.

I have an iPad 2, which is slightly more modern than an abacus, but it’s served me well. There was an unfortunate incident about three years ago with a shattered screen, but we’ve moved past it and the band is back together.

Here’s the dilemma: I need to replace all of these items relatively soon, but I’m in constant Fear Of Missing Out on the Newest Apple device.

Apple is so darn secretive about their new products, and while I do not wait in line for the latest and greatest of anything, I will be pretty ticked if I get a new laptop and a brighter, shinier model comes out a few weeks later.

A bit of detective work on Apple rumor sites suggests that 2015 *may* see a new laptop with a retinal display arriving sometime in the summer, a larger screen iPad model and an iPhone 7 in the fall.

I’m already overdue for a phone upgrade according to my contract, so I think step one for me will be getting an iPhone 6 (Gold, please!), and then I’ll limp along with my laptop and its power cord until the hoped-for new MacBook Air shows up (which work will hopefully support, since I’m overdue there, too).

Regarding the iPad, does anyone like the mini? The rumored larger screen device (nearly 13 inches) doesn’t really seem like something I want, but maybe a mini would be a compromise.

Or maybe I’ll go backwards to one of these:

This made me laugh last night when I arrived home.

Yep, all the facts check out.

No need to corroborate.

Typing the number is moderately painful, but I am still full of optimism that this will be the best year yet.

Ok, this is moderately embarrassing, but yesterday I hit up the Nordstrom Juniors’ Department.

Background: I needed a birthday gift for my niece.

Whose birthday was in December.

The first thing I saw was this scarf:

It’s a full infinity scarf in a gorgeous robin’s egg blue and fits an adult well with a double wrap.

How do I know this? I tried it on. And bought one for myself.

Seriously, if this was in the regular Adult Women’s Scarf area, it would retail for at least $50.

On the way to the scarf display, I stumbled upon this Frenchi polka dot swing tank:

This seems like strictly a layering piece, but it would look really cute peeking out from this Tilly sweater that I may or may not have purchased at J. Crew:

No kid needs this. 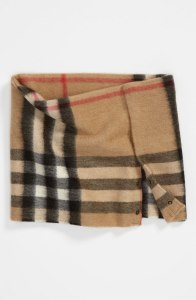 (Totally fits a grown up!)

This ring box from Henri Bendel is just the cutest little thing. 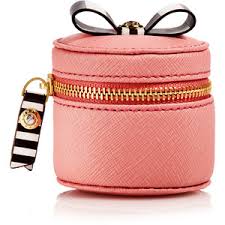 And here’s something equally adorable to put in it:

Confession: For ages, one guilty pleasure I’ve had on flights is perusing the Skymall catalog to pick out the weirdest item available for in-flight purchase.

This $995 suit of armor has won multiple times.

If Spouse is flying with me, we’d often separately pick out pretend gifts for each other, and usually the reveal (Zombie yard sculptures! Crazy cat lady sweatshirts!) would result in fits of laughter.

Despite all the looking, I never actually took the plunge to buy anything from Skymall and apparently no one else did either: Skymall announced a bankruptcy filing last week.

Perhaps the garden gnomes will go on sale soon?

For a long time I’ve felt guilty about tossing empty candle containers into the trash, especially when so many of them are quite elegant.

The problem is obvious: the vast majority of the time, the candle burns unevenly into a tunnel shape or else it melts down to a little nub at the bottom.

A nub that I cannot chip out for love or money.

Recently, though, I hit the jackpot: two candles burned cleanly down to the bottom of the jar.

When the last bit of fire snuffed itself out, I use a paper towel to wipe down the sides and bottom. The key here is that the wax was still warm, making this easy to do.

Next I cleaned both jars with soap and water. One was a clear container and I put it through the dishwasher. It came out nice and sparkly!

I’m currently using both of them to hold items on my desk at work.

(And yes, one of them is stuffed with lip glosses).

Two other tips I found online for cleaning wax residue:

P.S. Here are a few other snaps from my desk:

My Mom and Trixie. She’s so small! And my hot pink Buddha.

Smiling sperm beanie doll. One of the perks of being an OBGYN: sperm toys.

I think this is an X-bearing sperm. (Nerdy doctor joke).

Ok, I bit the bullet and decided to (temporarily) try Fabletics.

The way they suck you in is that the first outfit you purchase is only $24.95, with free expedited shipping.

Here’s the first outfit I got: 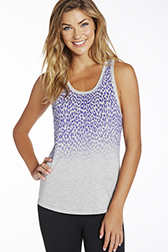 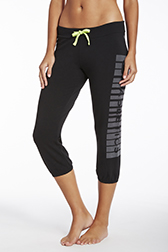 The tank is baggy and the capri pants (tee shirt material) are generously sized, so I am using this strictly as a lounging/sleeping ensemble.

However, the quality is better than expected and their website has a lot of other intriguing options:

I really like the baseball jacket. The gym bag is also cute and garnered good reviews elsewhere.

I’m going to give it a go! Let me know if you try Fabletics, too!

I love the message and mission behind Fellow Flowers, an inspirational women’s running movement.

And the most fitspirational moment of all is Declare It Day, where women everywhere are encouraged “to put words and dreams into action and declare a goal they are committed to working toward and achieving.”

Intrigued? Want to set a goal of your own?