Over the weekend and for the first part of this week, I attended an inspirational conference in Palm Springs that centered around being a better educator for medical students and residents. 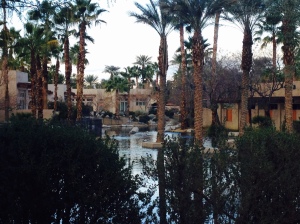 One obvious perk about Palm Springs versus Minnesota in January is the lack of sub-zero temps, and I took advantage of the sunshine and 70s to go for some fine runs. 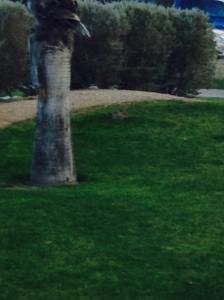 There was a tiny rabbit next to the path, I swear!

I also had a chance to catch up with my former colleague, E., who told me that she recently completed one of the Rock and Roll series marathons with a personal best and a time fast enough to qualify for the Boston Marathon.

I was so impressed, especially when she told me that she had shaved nearly 30 minutes off of her prior time on the same course.

I had to know her secret and asked her how she’d been able to do it.

Her answer was simple:

I just made myself run faster.

So simple and yet so hard to do.

I decided to give it a try.

On my first run – which was pre-conversation with E. – I ran 8 miles at my usual distance pace, which is about 9:30 per mile. I felt great.

The next day, there was a 5k race being held in conjunction with the conference.

Long story short, I couldn’t find the starting line and suddenly saw a gaggle of runners stream the other direction about a quarter of a mile ahead of me.

I’d had the conversation with E. the night before, and I thought I would just go for it and run faster.

I nearly had to sprint to catch the back of the pack but ended up finishing in the top 10 with a pace that was about 8:05 a mile. I did not feel great, but the distance wasn’t so burdensome that I couldn’t handle it.

And there was free beer at the finish line.

On my final run, I decided to pace myself a little harder than normal. I ran 5 miles at a pace between 8:30 and 8:45. While it wasn’t always comfortable, it was do-able.

I’m going to continue to incorporate speed into my running.

During the final run, I somehow managed to trip the radar on this speed trap but I think the sign was flattering me mightily: 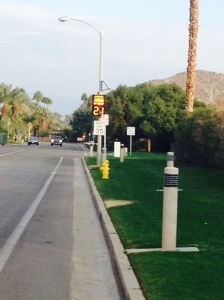 One thought on “Running Faster”