The last few days found me in my old stomping grounds of San Antonio, TX, where we lived from 2005-2008 while I did my sub-specialty fellowship.

I’ve only been back once since we left, in 2010 when I did my sub-specialty Board Certification in Dallas and side-stepped to SA to spend a few days with my sister’s family, since they were living there at the time.

I was *so* excited to have a work trip to San Antonio, and by sheer coincidence, the conference hotel (this amazing place) was only three miles from our old house. Should I swing by and get the outdoor deck speakers that we left behind?

Excitement turned to anger turned to despair last Tuesday, though, when my flight out went from delayed to super delayed to non-existent.

I got re-booked for a flight that put me in Texas a full 24 hours later and missing a whole day of the conference, plus a course that I’d paid a hefty fee to attend. Sadness.

I finally arrived about 10 PM on Wednesday night. I picked up my rental car and headed out to the hotel. Since it was in my old neighborhood, it was a cinch to find.

But before I got there, I had to get some sustenance.

Seriously, Taco Cabana is more than adequate for a hungry girl late at night. This particular outlet was the same one I’d hit many, many times during my Texas tenure. A two taco meal with fresh tortillas and a fresh salsa bar is still less than $6. Totally satisfying.

[Sidenote: never, ever knock Taco Cabana. You will be banished to the Midwest where Tex Mex is non-existent and your only Mexican option is Taco Bell. For shame!]

When I finally got to the hotel, I think they felt sorry for my late arrival and upgraded me to a suite. Score!

Here are a few pics of this very nice room. I wish I’d had more time to enjoy it. 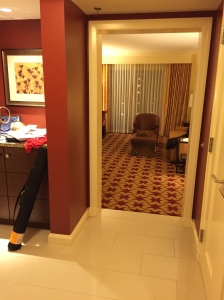 View from the entry room into the living room. 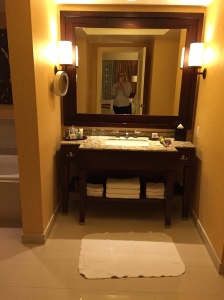 Bedroom area. There was also a huge balcony that spanned the living room and bedroom.

I caught up with the conference the next day and made dinner plans to see my friend L. that night.

I had a few hours to kill before dinner and decided to drive across town and surprise my friend D, who had been a nurse in the practice where I worked. I had trouble getting in touch with her before the trip and just decided to spontaneously show up on her doorstep.

When I got to D’s neighborhood, I shadily waited outside the gate to tail behind another car and get inside. My plan semi-worked: I drove the wrong way into the exit when a car came out, but fortunately no one else was trying to leave.

You can imagine my total shock when I got to D’s house and saw a moving van in the driveway.

I parked my rental car and got out, asking the guys moving furniture if they were moving someone in or someone out.

I mean, really? What are the chances? The exact moment I go to D’s house there is a moving van bringing in someone new.

I was too stunned to do anything other than get into my car. I briefly contemplated sobbing in the driveway, but that’s not my style.

Instead, I had a margarita, some excellent shrimp and commiserated with my friend L. over dinner.

It was so odd, and I felt like a chapter of my life had really ended. What kind of a friend am I that I didn’t even know D. moved?

[Update: D. messaged me the next day and said that she forgot I was coming to town and had relocated to Dallas to be near her daughter. I vowed on the spot to make plans to see her ASAP. She was so, so important to me when I lived there and is an amazing friend and human being].

I also had a chance to drive by my old place. Here it is:

I had to surreptitiously take this shot as my car was moving, so it’s not framed well, but this cute ranch house was briefly ours. MGM was born while we lived there. We had the greatest neighbors. We were younger then. We were happy there.

On the last night, I also ate dinner at my all-time favorite pizza place. I brought a coworker attending the conference with me and the lines were out the door when we arrived. It still smelled exactly the same, which is to say delicious. 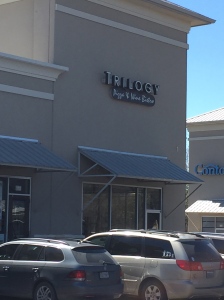 This Chicago-style pizza gives Chicago a run for its money, and I know exactly what I’m saying when I make that claim. I’ve been dreaming of this pizza since my last visit in 2010 and it did not disappoint.

The last thing I did was to stock up on Julio’s chips, which are only available in South Texas and slightly more addicting than crack. (I kid!) There is some type of rough salt and MSG-like seasoning on these chips that leaves you so salt-loaded that you can’t bend your fingers the next day, yet you can’t stop eating them. Ever. They haunt me. 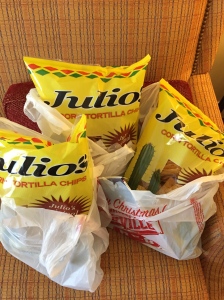 Money well spent. Two for me and one for my sister.

[OMG. I just discovered you can order these chips online when I was linking that above. Well, that would have served me well since I had to throw out a few items of clothing to squeeze these bags into my suitcase and the bags arrived as micro-bits of chip dust. Sigh.]

One funny observation from the hotel parking lot: 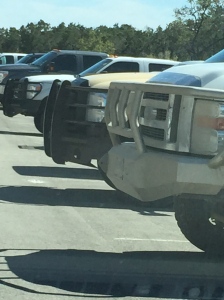 This is so, so Texas. I only captured a few in this shot, but there were a row of a dozen plus extended-size trucks in the parking lot, all with brush cages on the front. All the better to plow through the Home Depot parking lot.

A few shots from the hotel. They had lovely art: 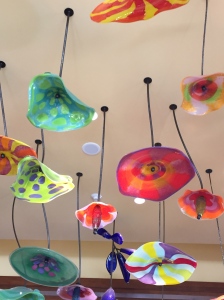 San Antonio, I heart you and miss you. I hope we meet again soon!