Yesterday I wrote about the first part of my recent trip to Ireland.

If you’re inclined, you can read about that here.

Quick recap: I went to Dublin last weekend with two friends to run in the Rock’n’Roll Half Marathon.

The weather for the prior day had been sunny and in the 60s, but as everyone warned us (repeatedly), it’s often raining in Ireland.

The starting line was almost exactly two miles from our rented apartment, and after considering options we decided to walk.

Temps were in the 50s and there was a steady pre-race drizzle.

We got there with just enough time to drop gear bags and hit the port-o-potties before taking off.

Fortunately, the rain abated and the race itself was dry, although I found the wet pavement a bit slippery.

I ran the whole course with my friend J. Our other friend, B., ran the race with an Irish friend.

Here’s a description of the course from the official website:

So, I guess we raced past all of those places but I was pretty focused on running, not sightseeing.

B. later told us that she had an ongoing commentary from her Irish friend and that we also passed the President’s House and the home of the U.S. Ambassador.

The last part of the race went through Phoenix Park, which is more than 1700 acres and dates back to the 17th century.

J. and I finished the course in about 2:08, which is not my best time but also not my worst.

One thing I loved about the race: salty bags of potato chips waited for finishers.

One thing I didn’t love about the race: we had to wait about 45 minutes in freezing, drizzly weather (it started raining again) for a shuttle bus to take us back to City Center.

The rest of Sunday consisted of showers, hot coffee and then dinner with a group of B’s friends who live in Dublin.

And here’s a cool thing that happened: I posted a post-race photo on Facebook and another friend texted me during dinner that she was also in Dublin.

A quick look at the map showed that we were only five minutes apart, so I ducked out of the end of dinner to briefly meet up with her.

There was a great moon over St. Patrick’s Cathedral as we walked back to our apartment:

On Monday we played tourist.

Stop one was the Guinness Brewery, which was a terrific tour that incorporated every sense, including smell (there was a room dedicated to smelling the major aromas in Guinness via large diffusers), sound (an electric harp you could play, a surround sound theater playing ads from all over the world), touch (piles of barley to rake your hands through), sight (art everywhere), and, of course, taste.

This is a sculpture that emulates a pint of Guinness: 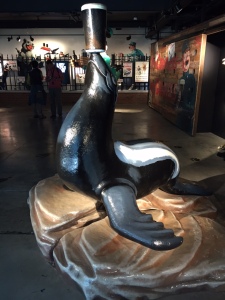 The fish on the bicycle was a kinetic piece that moved.

And while we were able to get a whole pint at the end, there was another spot on the tour where you could sample a tiny Guinness:

Next we went to the Old Jameson Distillery (Whiskey Tour #2 if you’re keeping track), and like Whiskey Tour #1, I didn’t like the whiskey. Again, sacrilege.

That evening we spent 45 painful minutes in a truly terrible tour of the National Leprechaun Museum, which was too bad to even discuss.

Dinner at Rustic Stone restaurant redeemed the night. This was an excellent meal, probably the best we’d had in Dublin and that is saying a lot.

Tuesday started early with a cab to the airport and the first of two flights home.

The best part is that the three of us unanimously agreed that we have to do this again. What great travel companions!

Here are a few more snaps:

Colorful knitted trees on the grounds of St. Patrick’s Cathedral 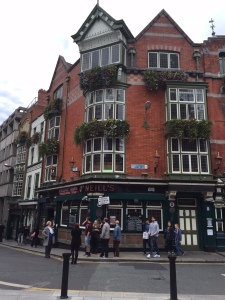 I couldn’t have made this trip any better.