After disappointment with Stitch Fix #7, I wasn’t sure how Numero Ocho would pan out. 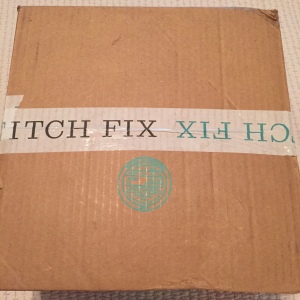 First glance at unboxing showed a lot of promise:

Lots of green and blue

As a sidenote, I’d also just received a dress from Banana Republic that I was banking on being something I could take on our upcoming trip to Alaska. I have one M.M. LaFleur dress (this one) that I’m bringing, and I was hoping to get away with just one other dress for the trip. When this one arrived, though, it was just wrong, wrong, wrong. So I was really praying that Stitch Fix had sent me a usable dress for the trip. 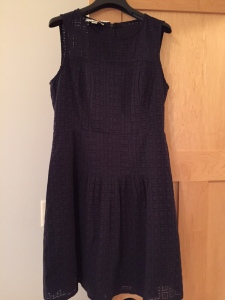 A dress! Score! This navy blue Donna Morgan dress was definitely my style.

Here’s a close up of the fabric:

The only potential problems I saw with the dress were the possibility of wrinkles and the price, which was $158 (more on that later).

The second thing I discovered in the box was this Skies are Blue plaid shirt:

This was a cute shirt. The colors are pink, green and navy. It’s made of 100% cotton but feels more like linen, and the construction is two-layered. I almost thought it was reversible until I realized it was two layers of very thin fabric – something that actually resembled cheesecloth – sewn together. The major issue was that the arms were too tight, which was depressing.

Next up: this green open cardigan. 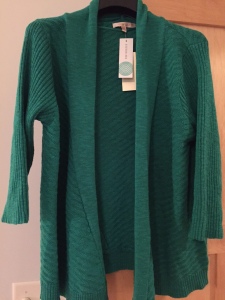 This was ok, but not a real style risk. I liked the color and while I have a lot of cardigans – some even nearly identical in style – I don’t have anything that’s quite this shade of green in my closet. It was a possibility.

The last clothing piece was a striped t shirt: 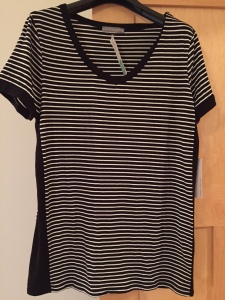 Now, I definitely love a striped shirt. I thought that this would be a match made in heaven. It was ok, but oddly enough, it felt matronly (a look I am not going for) when I tried it on.

The final item in the Fix was this necklace:

I hated this! I didn’t even take it out of the box. It looked cheap and you can see the “Made in China” tag in the photo above. Ick.

With the plaid shirt that didn’t fit and the hideous necklace, it was clear that I would be sending stuff back.

And that’s where Stitch Fix Math kicked in: it just doesn’t make sense to pay full retail for anything they send except for items I absolutely love.

Back went the t shirt.

Back went the dress.

Last Fix I didn’t keep anything and lost my $20 styling fee.

I’m still waffling on whether to continue with Stitch Fix or not. From reading other blogs and my friends’ experiences, I think there may be an arc to a Stitch Fix relationship, and I may be past the curve on the downside.