You know how you can anticipate something so much and then build it up to a place where it’s impossible to meet even the tiniest expectation? In essence, you’re just set up for disappointment before the event has begun.

Scratch that thought, because our trip to Alaska completely exceeded all of my wildest dreams.

We’ve been back for a little over a week and it’s still hard to take it all in.

Alaska previously hadn’t been a bucket list destination for me, but last year one of my partners went and raved about the whole experience so much that I had to check it out.

I also enjoyed the thought of having an unplugged vacation with the kids, mostly free of lights/buzzers/gizmos.

Huge bonus: the chilly weather in Alaska also precludes bikini wearing, so bring on the buffet! (Kidding, sort of).

We started the trip with a weekend in Vancouver, a city I fell in love with last year.

The weekend was a mini-vacation in itself: spouse took a tour on a float plane, the kids and I went to the Vancouver Aquarium, we saw the Olympic torch from the 2010 Games, and I ran in Stanley Park twice.

Our boat as seen from Stanley Park

By the time Monday rolled around, we’d squeezed in a lot of fun and it was time to board the Disney Wonder.

This was the sixth Disney cruise for the kids and me and #5 for Spouse (he missed out on a quick trip the kids and I took with my sister last winter).

The Disney Wonder was new to us. We’ve been on the Dream and Fantasy before, but not this ship. I was nervous because the Wonder (along with the Magic) is one of the older, smaller ships. Unlike the Magic, though, it hasn’t undergone a major remodel, so I didn’t know what to expect.

We stayed in a one bedroom suite on the 8th deck. Here are a few shots of the room. It was really spacious: 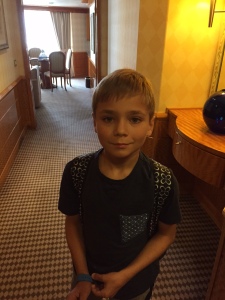 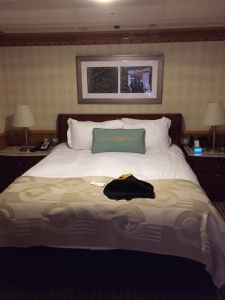 Trixie liked the fruit bowl that was waiting for us:

Concierge service is also different on the Wonder than the newer ships. Specifically, there is no Concierge Lounge, which is usually our favorite hangout.

However, Glenn and Rodrigo – the two Concierges onboard – really went over the top to provide a Concierge experience. In the end, I think they out-did the newer ships, and that is saying a lot.

Here’s a summary of Concierge amenities on the Wonder:

As for the trip itself, it was amazing! After setting sail the first day, the second day was at sea. The scenery was spectacular. 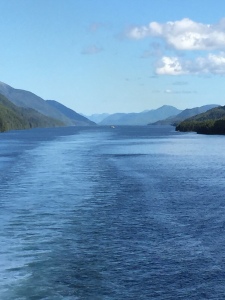 During the third day, we slowly floated through Tracy Arm fjord, ultimately ending near Sawyer Glacier. Spouse and I had brunch at Palo that morning and were treated to views of iceberg chunks and jumping whales. (I also ate most of a gorgonzola and grape pizza, washed down with Prosecco. Just thinking about it now makes my mouth water…) 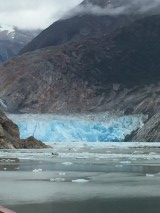 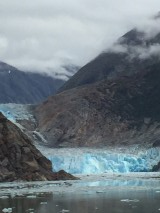 Trixie on our balcony, taking in the sights:

The four of us took the Whitepass and Yukon Railroad in Skagway the following day, riding all the way to the summit. Spouse is a train nut and this was a long-standing item on his Wish List. Check! We followed up the four-hour trip with lunch at the Skagway Brewing Company.

The next day in Juneau, our first stop was whale watching. Hands down, this was one of the most incredible experiences of my life. We watched a group of five or six humpback whales bubble-net feed for nearly two hours. The whales swim in an underwater circle, blowing bubbles that force smaller fish (herring) to the surface.

Here is a National Geographic video of what this looks like (totally worth your time to watch this!):

The whales simultaneously jumped out of the water, over and over. I overuse the word “awesome” all the time, but this truly was something that left me awestruck. I could not believe this was happening in front of my eyes. This was a once-in-a-lifetime experience.

Our crew took us to lunch on an island and we feasted on freshly grilled salmon. MGM hunted for rocks when we were done:

We also capped that day with a visit to the Mendenhall Glacier.

Our last stop was Ketchikan. The guys went salmon fishing (double thumbs up from them) and the girls went bear watching.

Trixie and I saw about ten bears, including a mom/cub combo: 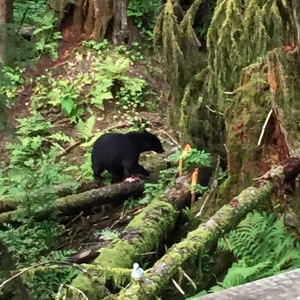 The streams were packed with salmon. I felt like I could have grabbed one bare-handed. The mama bear above just caught lunch and has a fish dangling from her mouth.

There were also a lot of “Frozen”-themed events on board, which Trixie loved. She met Anna and Elsa, plus Olaf.

There was also a “Frozen” scavenger hunt around the ship that went on for three days. If you completed all the clues, you won a Rice Krispie treat decorated in a “Frozen” theme. Trixie and I had so much fun finding the clues, but it was disappointing in the end that she couldn’t enjoy the reward since Rice Krispies aren’t gluten-free (malt is the culprit in the regular version, although there are special GF Krispies out there).

One night even featured a “Freezing the Night Away” deck party. This was a stage show with all of the characters from “Frozen,” culminating in Elsa singing “Let It Go” (of course it ends with Elsa singing “Let It Go;” you knew it would) with fake snow falling on deck. MGM was having none of it and requested to be in the kids’ club that night. Trixie wore her Elsa dress and basically lost her mind.

One other event worth mentioning: Trixie lost a tooth onboard. Fortunately the Tooth Fairy was able to scrounge up ten quarters in exchange for her tooth (the going rate around here), but there was much speculation about how she got to the ship (Flying? Her wings would get too cold? On another boat? But how? The final verdict was via helicopter).

Two cute towel animals (why do I find these so hilarious?):

Final thoughts: For so many reasons, I think was quite possibly our best vacation ever. I wasn’t sure what to expect, but Alaska really outdid herself. I am so grateful that we were able to have this adventure.