A couple of weeks ago, Trixie started asking us to play a game called “This Disney Character.”

The game is simple: one person gives clues to the identity of a Disney character and the others guess. The person who gets it right does the clues for the next round.

Sample: This Disney Character is a snowman who loves summer.

Please don’t make me answer that one for you.

However, last week the game took a dark turn.

As I’ve mentioned before, Trixie is not the up-and-at-’em type in the morning.

She’s more like a mid-90s Courtney Love forced to meet a parole officer in the A.M. 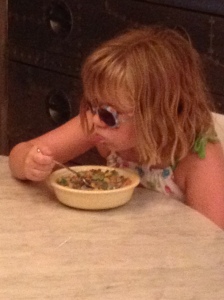 Last week the two of us were alone in the kitchen and the usual morning scramble to get out the door was in full swing.

I can’t even recall the precipitating incident, but all of sudden she snarled, “This Disney character is chubby, sweaty, stinky and is standing next to the sink!”

Ok, I *was* next to the sink, but really, the rest of that is not true.

(Is it? Sniff. My self esteem is destroyed by a six year old).

Once I recovered I was able to come back with one for her:

This Disney character is about to lose iPad privileges for the rest of her life.

It only took one guess.

P.S. Here’s another Disney game that is a lot of fun.