I was serious when I previously mentioned here and here that I own too much stuff and need to edit, edit, edit. 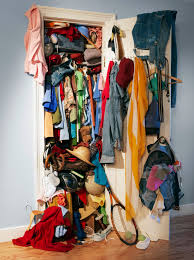 For fall, I haven’t purchased many casual clothes yet (exception being my Elizabeth & Clarke order), although I have my eye on this sweater and scarf from Banana Republic.

While I’ve been vigilantly deleting my email offers from Banana, J. Crew and all of my other favorite haunts, I did pony up for some new work duds.

The dress code at my workplace is described as “business formal.”

That means suits or dresses. Every day.

Like everyone who starts working at This World Famous Medical Center, I had to go on a suit shopping spree before I started there seven years ago.

That was after MGM but before Trixie, after one marathon but before eight, after 30 but before 40, etc. You get the idea.

A lot has happened in that interval but when I recently scanned my overstuffed closet, every one of those original suits was still there.

Granted, I’ve added many pieces in the interim and some of the old stuff hasn’t seen the light of day in a looooong time. Some of it fits. Much of it doesn’t.

Since Stitch Fix has been letting me down so much lately and never really had the building blocks I needed (they’re more fun pieces than work staples), I’ve been hitting M.M. LaFleur hard.

This fall I invested in a Toi dress, which I absolutely love.

The fit is perfect and the quality is excellent. I tried to get it in a teal color, too, but was unsuccessful. The kind stylists at M.M. told me that it was coming out soon in two new shades, blackberry and rye, so I’m staying hopeful.

The Hanna dress in cornflower blue and black also made their way into my wardrobe. Although these both are fine for work, they feel more like party dresses to me. I took the blue one on our recent Alaska trip and wore it to formal night on the cruise.

Since these dresses are sleeveless, I also needed a jacket to wear over them. I received a black Angelique jacket in my first order. It was very flattering, non-wrinkly, and the quality of the knit reminded me of St. John.

I also received the Sant Ambroeus in lavender in my second order and ended up liking the clean cut even better than the Angelique. I had to keep my eye on the website but eventually I was able to snap it up in black, too.

The last piece from my initial M.M. LaFleur spree was this cocoon sweater, which – alas! – is no longer available.

This is a cozy layering piece, not a Jedi robe, which is what it looks like above.

Since my recent habits got me into the V.I.P. Presale (ummm, yes, embarrassing), I had a chance to order before the collection went live last week.

There are several new versions of their staples and a few entirely new pieces. I felt like the Toi dress, the jackets and the cocoon sweater would tide me over for fall and winter, and the Hanna dresses would be sufficient for spring and any warm weather travel during the winter.

There was one more thing I had to make mine. This Graham sweater in Midnight Green really caught my attention from the #PracticeMakes collection.

This looks like a great transitional layering piece in a color that is mostly absent from my wardrobe. I can’t wait to get it.