I was *so* excited yesterday to get an email from runDisney with a special early registration link for the 2017 Tinker Bell Half Marathon. As I’ve written before, this is probably my favorite race. 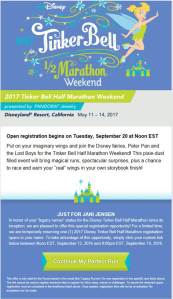 The message said that in honor of being a legacy runner since the inception in 2012, there was a spot in the half marathon reserved for me. I could register before the masses (general registration opens September 20th) and simply had to click the link between September 12th and 19th.

Wow. At first blush, this was awesome!

RunDisney races have become so popular that some sell out in minutes, and there are several blog posts dedicated to strategies to gain entry.

From my experience of doing 15+ runDisney events, I’ve found that what works for me is to put several reminders on my calendar to get on the registration site about 5 minutes before registration starts, then frantically hit “refresh” until it does. The next step is to typically be placed into a queue until it’s my turn to register, which is when I type as fast as I can and hit “return.” I don’t exhale until I see the confirmation screen.

While I usually get into the race I want (with the exception of you, Wine and Dine Half Marathon, grr!), it’s always heart pounding and there are a few panicky moments when I watch the clock tick and think that this is the time that I’m not going to make it.

So, while I was excited to see this offer for the guaranteed half marathon spot, what I really, really like about the Tinker Bell series is the Pixie Dust Challenge, which is a two day event consisting of a 10k on Saturday followed by the half marathon on Sunday.

And my special link was for the half marathon only.

In the end, I hemmed and hawed for a few minutes but bit the bullet and registered. I’ll probably still try to get into the Pixie Dust Challenge next week and if that works out, I’ll query runDisney regarding a refund.