I returned late Monday night from a long weekend in Las Vegas with my friends J. and B.

You can read about my trip prep and packing here.

Officially, we were there to run two races that are part of the Rock ‘n’ Roll Las Vegas Marathon series. We chose to do the 5k on Saturday night and the half marathon on Sunday.

Unofficially, we were there to have fun.

J. and B. are Rock ‘n’ Roll Las Vegas vets; this was a first time experience for me and a third for them. They also convinced me to spring for the VIP package, which gave us some nice perks throughout the weekend that I will detail in the trip report posts.

We had an early flight into Las Vegas, and one of the things I love about going there is how quick it is to get from the airport to the hotels on the Strip. With a 10 minute taxi ride, we were at our hotel before 11 AM.

The room wasn’t ready yet, which we expected, so we had lunch on the terrace of Olives, which overlooks the Bellagio fountains. The weather was perfect and we were able to see several fountain displays during the course of a leisurely lunch that included day drinking.

This was a perfect moment.

The seasonal floral display at the Bellagio was stunning. It was still autumnal and I think they piped in a spicy fragrance to enhance the experience. Throughout the weekend – even in the wee hours of the morning – it was crowded with people taking photos.

Our room was now ready. I included a few photos in case you are curious about the rooms at the Bellagio. They are nice but the decor is not exactly my style. Everything was well-maintained but it seemed a bit formal and dated.

Two queens in the sleeping area: 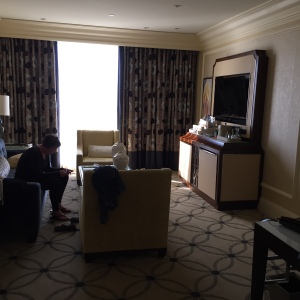 Two of the bathrooms (the bottom one was a powder room. I am also not showing a third bathroom with a walk-in shower): 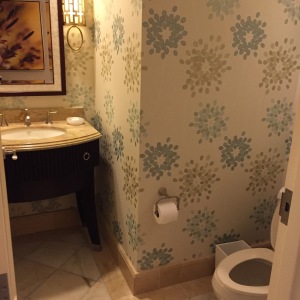 This was a good room for a group of friends to share. We had them bring a roll-away single bed, but we could have easily doubled up in the queens and with the roll-away and sofa in the sitting area (which I discovered was quite comfortable during an extended nap on Sunday), you could probably squeeze in six people. B. is a member of a Bellagio perks program and we got a terrific deal on this room, so it was a no-brainer to pick it.

Next we were off to the Race Expo, which involved taking the monorail to the Las Vegas Convention Center. This process was seamless and we picked up our VIP packets within a few minutes. As far as race expos go, this was pretty standard. I was happy to score two free lip balms and a 70s-style terry cloth headband, so that was cool.

Our entertainment for Friday night was a VIP reception at Hyde, one of the signature clubs at the Bellagio. This was one of the perks of the VIP package. As we were walking in we saw running legend Meb Keflezighi. That was awesome. I subsequently saw him again on Saturday  (twice) and Sunday. I wish some of his running skill would have magically wafted on to me.

The crowd seemed to be a mix of people who worked for the Rock ‘n’ Roll organization (all of whom were dressed infinitely better than I was in jeans and a black shirt) and regular runners like us with the VIP package. I thought the best part was the venue; Hyde is an open-air space with a direct view over the fountains. They are eye level and it was an incredible background to see throughout the night.

Oh, and there was entertainment: Ozomatli played. Full disclosure: I had no idea who they were. We stayed a bit after the party ended and Hyde transitioned into full club mode.

Another full disclosure: we had taken liberal advantage of the open bar during the party and decided that we should get a snack at that point, which was quite unnecessary.

We stopped at a 24 hour restaurant in the hotel and placed an order that was something like this:

On the way back to the room, one of my friends decided that she needed to buy this three foot bear in the gift shop:

He became a fun presence throughout the rest of the weekend.

P.S. I will get to the running, I promise! Saturday’s events will be up next.