The last thing we did during our Rock ‘n’ Roll Las Vegas racecation weekend was visit the Spa at the Bellagio.

We didn’t book appointments before we arrived and were fortunate to secure them, although for a while it looked like we might not. Next time, I would book my appointments far in advance, especially for the busy hours of 9-11 AM.

In the end, the three of us were able to have facials and massages.

The Spa at the Bellagio is huge.

When they were checking us in and leading us back to the waiting area, I could see a list on a clipboard of all the people who had appointments at 9 AM, and it was a full page.

The robes, slippers and lockers were pretty standard. In the changing area, there was fresh carrot juice (I did not try; B. liked it and J. said it was gross), lemon and ginger water, tea, coffee and bottled water.

The waiting area for massages had about 15 people in it while we were there, and I did not like the fact that men and women were in the same area. There were some guys who did not seem to have their robes secured very well, and these were not the kind of guys you would want to see with their robes undone.

Fortunately, this part of the visit was brief and we could silently roll our eyes at each other while avoiding direct views of the unpleasantry.

I had booked a standard facial but changed to an anti-aging one when I got back to the room. The products were from a professional Elizabeth Arden line. I thought they were fine.

What was really amazing was the lip balm that they applied at the end. Over the course of the weekend, my lips went from dry to parched to raisin-like to peel-y. The combination of dry desert air and dehydration, plus licking my lips constantly during the race even though I know I should not do this was too much. Once the facial was done, I inquired about the balm and learned it was this brand. 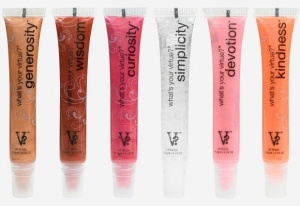 From what I can tell, What’s Your Virtue gloss is such a small company that they don’t have a website, but there is an outdated blog from 2014 I found. How the Bellagio chose this brand is a mystery, but I bought the clear gloss and I absolutely love it. This turned my dry lips around in less than 24 hours. The price was $12.

The second appointment I had was a 50 minute massage. Especially after a race, I would prefer a deep tissue massage to work out the knots, but hotel spas are – IMHO – notoriously light on the pressure. The technician I had was somewhere in the middle, so I was ok with that.

There seemed to be quite a few people who had already checked out of the hotel and had their luggage with them when we got back to the locker room. This is a reasonable strategy if you have an afternoon or evening flight (one I have used many times), because you can shower and get ready to go home after your appointment at the spa. For reference, the Spa at the Bellagio had many private rainfall showers, shampoo/conditioner/shower gel, oversized towels, and the standard things (combs, hair dryers, hair products, aerosol deodorant) that you would need. If you had an abundance of free time, you could also use hot tubs, steam showers and a sauna in the women’s only locker area. We did not have an abundance of time so we did not.

Sadly, then it was time to go to the airport.

The flight home was uneventful.

My final thoughts: I had a blast. J. and B. are super fun travel companions. The three of us had actually already been to Las Vegas for a long weekend over Memorial Day, so this was a familiar trip. I liked the fact that we could offset some of the calories with running. The two trips were different, though, so I am not sure if one was better than the other.

How does the Rock ‘n’ Roll half marathon compare to other races? As I said previously, the course is flat and fast. This is great. The night start is unique, as is running on the Strip. I have only done two Rock ‘n’ Roll races (the other was Dublin in 2015), and overall I think I like the organization of Run Disney races better (signage, water stops, corral placement). Having said that, I’ve done worse races, too. I would do this again. If you can swing it, I’d also strongly recommend adding the VIP package, even if just for the eagle eye view of the finish line at the post-race party.

How about the medals? These were solid, heavy and quite interesting. I forgot to mention earlier that since we did both the 5k and the half marathon, we got a third medal for completing a “Remix Challenge.” Some 5k medals are flimsy, but even this one was substantial. The half and Remix medals had spinning elements. (See below).

Would I change anything? This is a hard one to answer.

And this guy came home with us: 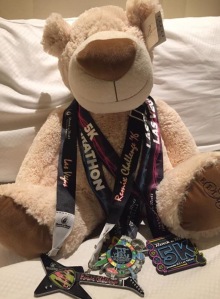