I’ll try to wrap up the rest of the trip, which consisted of Thursday, Friday and Saturday. We had a late flight out on Saturday night (10 PM), but we were still able to enjoy the day.

On Thursday we woke up, ran and had breakfast again at the hotel. I made the mistake of ordering the breakfast buffet. I say “mistake” because when food is unlimited, I tend to eat unlimited amounts. This wasn’t an exception. I had an omelette, an eggs Benedict concoction with crab, a small kale salad, a mini carrot muffin, part of a piece of toast with lilikoi (passionfruit) jam, and some fried rice (!). Oh, and then pumpkin bread pudding for dessert and some token fruit. Ugh. I can easily say that I got my $39 worth of breakfast, not that this should be a point of pride.

After such a decadent breakfast, I needed a nap. The weather was overcast, so I also checked in with the spa to see if they had any openings. Bingo! They did. I had an excellent massage and a facial, both with Michelle, who is the spa’s trainer. Hotel spa treatments can be hit or miss, but this was all hit. Michelle was the bomb. I liked the skin care products they used, too. The brand is Osea. Michelle told me that she calls their Red Algae mask the “hangover mask” because of its complexion reviving capability. I made a mental note of the product.

By this time it was the afternoon and we decided to head to Hanalei for dinner. The valet recommended driving to the end of the road as long as we were heading that way. It’s true: the road deadends at Ke’e Beach, which is also the start of trails to hike the Napali Coast.

The drive to the beach was quite interesting since we had to cross about seven one lane bridges to get there.

When we arrived the parking area had about a dozen cars but the beach never felt crowded. The surf was pretty strong but a few people were swimming, despite signs advising against this posted at the (empty) lifeguard station.

I’m the worst at selfies.

We had dinner at the Dolphin Restaurant in Hanalei, which had some of the best sashimi I’ve ever tasted. This was the second – but not last – time we had sushi on the trip.

Friday was a rinse and repeat for the A.M. routine: wake, run, breakfast. I wisely avoided the buffet. We were nervously watching the weather because we had a helicopter tour scheduled at 11 A.M. and were praying that the sunshine would hold. It did.

I decided not to take any pictures during the helicopter tour and just experience it. I’m glad I did it that way. I am actually quite scared of heights and was also a teensy bit worried about becoming airsick in a helicopter, but once we took off, neither of those problems emerged. It was really cool!

I was seated next to our pilot, Steve, who made corny jokes but reassured me when he said that he had over 25,000 hours of flying time. I decided right then and there that we probably wouldn’t crash. Spoiler alert: we didn’t.

This was my first time in a helicopter, and it felt like we were floating. I loved it. The views were incredible. There would be an amazing waterfall and then bam! A better waterfall. Rinse and repeat for 45 minutes.

Friday afternoon was beach time. I ordered tacos and a beer from my chair and had to fight off this chicken for my lunch.

We decided to eat dinner at the less fancy restaurant at the hotel. We had sushi and fresh (cooked) mahi mahi. It rained but we were still able to sit outside under an overhang. It was lovely.

We started watching “Dateline” at 8 P.M., but both of us were snoring before we even found out Who Did It. I did not regret falling asleep at approximately 8:20 P.M. for a second. 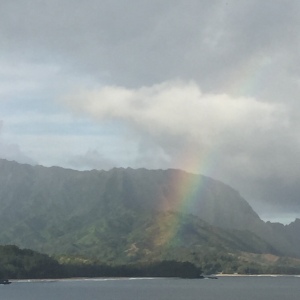 Saturday was a sad day since we knew we had to leave. We ran, breakfasted, and then (reluctantly) packed up our belongings and parked them at the bell stand.

We spent the entire day at the beach, probably eight hours total. It was mostly sunny. I swam. I read. I visited my jumping crab friends one more time.

At 6 P.M. we started to get ready to go. Pro tip: since many flights depart Hawaii at night, many (nicer) hotels will have a courtesy suite where you can shower, change and prepare for your (sad) return to reality. The St. Regis kindly gave us a key to an unused room and we were able to do exactly that.

Intercession: some of the Christmas decor at the hotel. 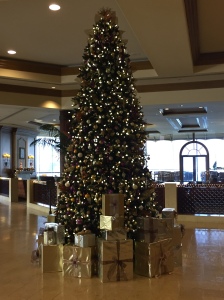 We left the St. Regis around 7 P.M. and were prepared for an hour drive to the airport, leaving enough time to gas up and return the rental car. The valet told us a startling piece of news: there was an accident on the lone highway and a fallen telephone pole was blocking all traffic in both directions. He told us to be prepared for a three hour trip.

We set off and – for the win! – did not encounter any problems. The accident had cleared by the time we reached it and were able to get to the airport in our anticipated time of 45 minutes. We had planned to eat dinner there but the options were Slim and None. We went to Starbucks and Spouse had a sandwich; I had a bag of sweet potato chips and a Clif bar that I found in my bag. What a sad letdown from the gourmet food of the prior days.

Our first flight was slightly delayed. We left around 11:30 P.M. when the estimated departure had been 10:28 P.M. I wasn’t worried because I knew on the flip side that we had nearly three hours to kill at LAX before our final flight.

I was still pretty hungry when we boarded and sad to discover that even in First, there was not a meal service. I would have gladly eaten an airline meal at that point. The flight attendant was awesome and gave me a snack box, which I basically inhaled and then regretted because it was all junk food and salt. I felt really gross when we touched down at LAX nearly six hours later.

I won’t bore you with the rest of the details, but our final flight was delayed nearly seven hours and I spent most of the day in the Delta lounge, eating more salt, reading my iPad and people watching. Once we landed in Minneapolis, we were met with single digits temps. Ugh. I asked myself for the millionth time why I live here.

I brought this new bag but felt ridiculous carrying it during the one night that I wore a dress: 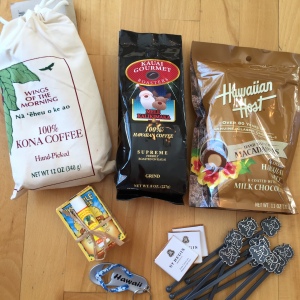 You may notice that I stole 10 swizzle sticks from the St. Regis. I have a collection. It’s a Thing.