After a bit of hemming and hawing, I decided that the Women’s March was so important that we needed to attend.

Even in my head, I knew the Con List was totally lame and the right thing to do was to go. Sometimes I grumble about things, but in the end I almost always Do The Right Thing, and the March was something we could not miss.

MGM (9) and I set off on Saturday morning. [Trixie (7) had a birthday party to attend and Spouse brought her later in the morning. MGM and I never saw them, but we knew they were there]. 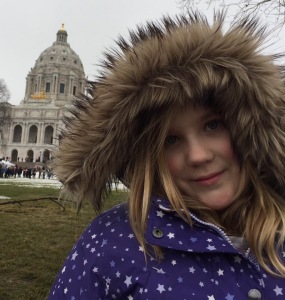 The temps were in the mid 30s and there were periods of rain on our drive to the March. We had zero issues with travel and parked without a problem in the parking garage of the Minnesota Science Museum, which was about a half mile from the organizing point for the March. We joined the crowds walking to the starting point. The mood was upbeat. People were incredibly friendly. It felt great.

Shortly after we got to the organizing point, I got a call from my friend and work partner, P., who had arrived with her daughter. We met them and then the March started. The crowd was estimated to be more than 60,000 people.

There were so many witty signs along the way. This was MGM’s favorite: 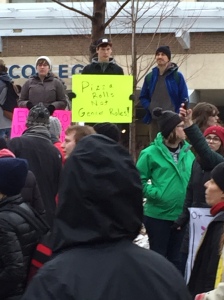 This one is even harder to see, but I loved it:

You can’t comb over misogyny.

One speaker I was excited to hear at the rally was Ilhan Omar, the first Somali-American lawmaker in the United States.  She was elected in November to the State Congress. She received huge applause and was very inspiring.

The funniest thing I saw all day was a dog wearing a Donald Trump wig. I wish I would have taken a picture of it because it was so hilarious. This is NOT the dog, but I googled this and found an entire costume from My Best Friend Boutique:

Remarkably, the rain held off during the rally and with temps in the mid-30s but appropriate winter gear, I was never cold. Not even a bit.

In the end, I couldn’t have imagined Not Going. The spirit, camaraderie and energy were incredible. I was lucky to be a part of this. I think my 60,000 new friends would all agree it Felt Important.

After we left the rally, we had lunch and I told MGM we could go to the Science Museum if he wanted. He did. This was a bit of quid pro quo on my part, since the March wasn’t his top idea for a Saturday.

They had an interesting exhibit about medical quackery. This is a “brain tester” from the 1920s: 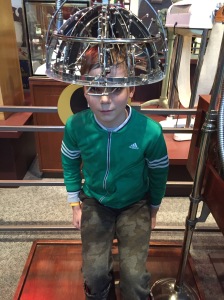 MGM and I also did an experiment to extract DNA from wheat germ. This took about 20 minutes to complete. 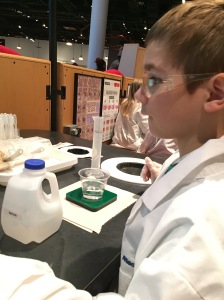 The last step was a show-stopper: DNA floated through a layer of alcohol to form a swirly cloud in a test tube. We were both impressed. 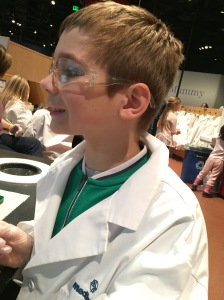 We drove home without incident, cooked a meal together as a family and called it a night.

It was a successful Saturday.