I finally got around to trying micellar water, only about two years after it became A Thing.

If you’re late to the party like I am, micellar water is a facial cleanser composed of microscopic balls of oil suspended in water. The consistency is watery, not at all like the two-phase eye makeup removers that require shaking to combine before use.

Last summer I was really happy with the skincare routine I was using, which consisted mostly of Bliss products.

I ran out of toner, though, and instead of ordering more (especially since Bliss isn’t running any current promotions), I decided to check out the skincare aisle at Target.

Micellar water caught my eye, especially this one, which was billed as both a cleanser and a toner. It’s Pacifica Cactus Water Micellar Tonic, which retails for $11.99.

My first impression was that I did not enjoy the scent, which is soap-y in an unpleasant way. So far, I’ve used this product three ways: to take a first pass at getting makeup off before using a second cleanser to finish the job; as a better-than-nothing one step process on a night when I was too lazy to do anything else; and as a last step, after cleansing, much like I would have normally done with a straight-up toner.

As I mentioned above, the texture is watery, not at all oily, and while it seems to get some makeup off, it doesn’t leave my skin seeming or feeling clean enough on its own. When I used it as a last step, it did not leave my skin feeling sticky or soapy, which is a plus. I still like the Bliss toner better.

I also purchased this Garnier micellar water in a 3 ounce travel size: 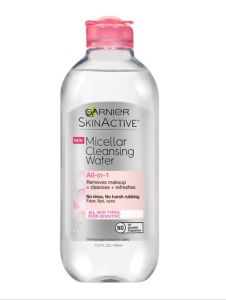 Considering that this was only $3.49, the investment was small. I tossed it into my toiletry kit and used it several times last week when I was staying in a hotel during the workweek.

Everything I said above about the Pacifica micellar water applies to this one, too. The scent gets a grade of D- in my book, and it did a terrible job of trying (and failing) to remove the Bobbi Brown cream shadow stick I was wearing as eyeliner, although to be fair this is billed as a long-wear product and acts accordingly. I also seemed to need a lot of the micellar water with each use. I’m already down a quarter of the bottle and it’s been less than a week.

Final verdict: I’m not impressed with micellar water. It’s an ok product as a middle step, and maybe I should consider it as something quick to swipe across my face before a workout (hey, it’s better than nothing), but it doesn’t seem like the one-and-done miracle worker I was hoping to find.