After reading about the existence of Hudson and Bleecker travel shoes bags on another blog, I got on one of my kicks where I *had* to have them for my fantasy trips (these are all in my head), wherein I am perfectly coiffed, always well-appointed and organized to within an inch of my life using oh-so-stylish luggage and other assorted travel gear.

So, yeah, I was determined to buy these and keep them stashed in my closet, probably forgetting about them when I actually went somewhere.

Problem number one was that they were sold out everywhere, including on the Hudson and Bleecker website.

I kept stalking the bags, narrowly missing them on a flash sale site, until one day, they re-appeared ON SALE at the Hudson and Bleecker site. 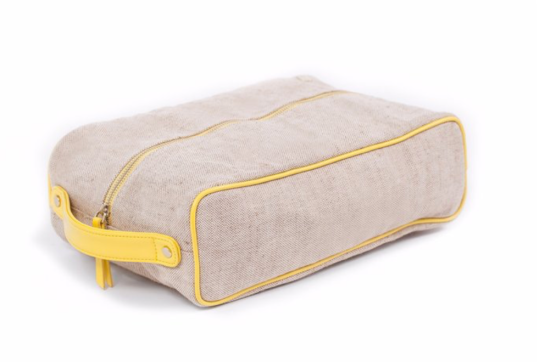 These are from the “Cinque Terre” collection and are linen with yellow trim. I was really excited to get them.

I received an email from Hudson and Bleecker a few days later saying that the bags were no longer available. They offered to substitute one of their packing cubes and give me an additional 10% off my order.

There were only two styles of packing cubes to select, one chambray and the other with a floral print.

I wasn’t happy but chose the chambray packing cubes. Supposedly it is the same dimensions as the shoe bag, but with a side zipper instead of one in the center.

The chambray cubes arrived. I was initially underwhelmed.

The inside has some nice features, including an internal divider (consisting of a slim zippered pocket, which could hold jewelry), as well as another zippered pocket on the other side.

Here are some close up shots of the interior:

I tried them out with some shoes. At first, I used just one pair of heels:

This seemed like poor space utilization, so I tried a few combinations with two pairs:

Two pairs of flats worked the best, but the heels/flats combo was also ok.

I’m going to give these a real life test next month when I take a work trip to a medical conference.