I received a new Stitch Fix in November, and it was mostly good, but not all of the items were keepers and I forgot to photograph the ones that didn’t make the cut.

So now we’re all caught up.

Here’s a peek, if you’re curious… 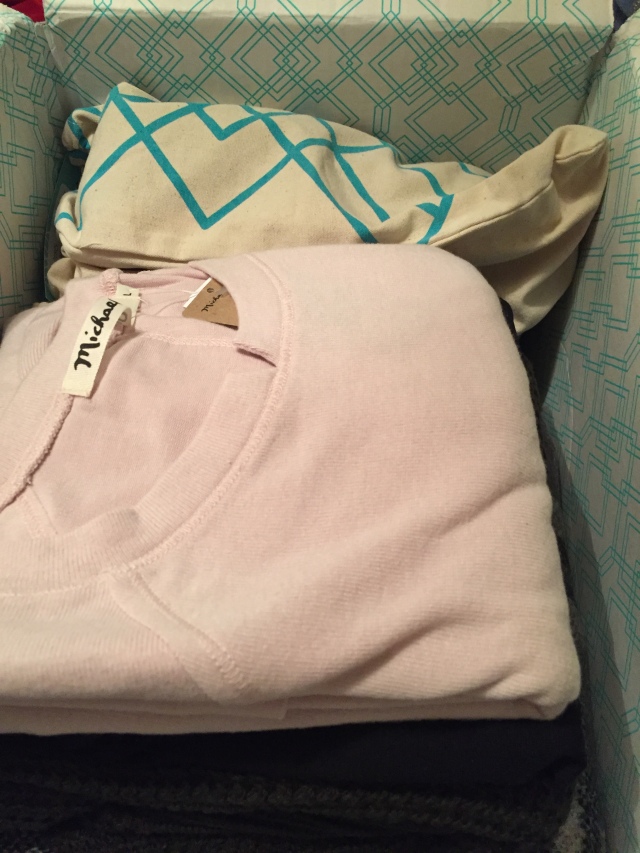 First up was the Millennial Pink “Cerella” sweatshirt by Michael Stars, which was listed at $98.

This sweatshirt is incredibly light and soft. The color is totally on trend. I’m not a huge fan of thumbholes but I like the option. Spoiler alert: I kept this item and have already worn it a few times. Two things I noticed right away: the edges are unhemmed (potential unravelling issue for the future) and even after the first wear, this sweatshirt started to pill. While I like the piece, it probably wasn’t worth $98.

The drawstring bag at the top of the picture held these:

These Toms “Lenox” sneakers were listed at $88. I received this metallic pewter color but they are also available in a cool rose gold. I liked these a lot but had recently purchased another pair of metallic sneakers, plus they were half a size too big. I sent them back, then felt regret. Over the Black Friday – Cyber Monday weekend, though, I was able to find them in the correct size at 25% off, so in the end I made them mine. They are incredibly versatile and comfortable. I’ve also noticed this exact pair or similar styles in magazines everywhere, especially mixing these up with high and low pieces for holiday looks. I’ll definitely be wearing mine over the holidays. High praise.

This piece gave me the hardest time:

I’d pinned this duster coat a few weeks prior to having my Fix styled. I loved the mix of gray and pink, and it was styled on Stitch Fix’s site over workout clothes to give a cute athleisure look. I was thrilled when I opened the box and saw this, but it was way too big. By that I mean oversized to the point that it looked ridiculous. I am tall, but this was crazy. Let me tell you, I tried and tried to make this work. I tried it as a cardigan. I tried it as an overcoat. I tried belting it. Nothing made it less bulky. The worst part was that my Stylist also mentioned that she’d picked this to center an entire outfit around it, pairing it with the sweatshirt, sneakers and a pair of leggings. I so wanted to wear that outfit. It did not work out. Sigh. I may request this again in a smaller size, because giving up on this cute duster has proven hard to do.

Speaking of those leggings, I don’t have a photo, but they were black zippered leggings and they were very nice. The only problem was that I’d recently bought something similar, and as long as I was already sending things back, this was an easy call to return.

If you’re keeping track, that’s four of five items already described, with one keeper and three returned (although with regret).

The final piece I received in this fix was the Pixley “Castellano” waffle knit shawl cardigan in a dark olive color. I exhausted the internet trying to find an adequate photo of this, but I came up empty handed. It’s easy to picture, though: a loose knit, Army-green cardigan with a thin band of black faux leather trim at the wrists and on the front placket. The fit was weirdly tight in the arms but stretched with wear. I had requested something in this color and my Stylist delivered. I always complain that I need to stop buying cardigans, but I love them and I could not resist, so this one also made its way into my closet.

Technically, this Fix doesn’t look like a success because I only kept 2/5 items, however, when you factor in the shoes I ordered elsewhere and the regret I feel about the other picks, I’d call it a Winner.