**** This is one of my favorite blog memories. It still cracks me up to the extent that I wanted to share it again. For what it’s worth, Trixie is now 10 and occasionally wakes up of her own volition. ****

I was dead serious when I posted last week that getting the children up-and-at-’em is akin to poking two bears.

Trixie (5) has taken to wearing sunglasses in the A.M, which overall channels a strong 1990s Courtney Love vibe.

Here she is enjoying a nutritious breakfast of Fruity Pebbles, which was immediately preceded by her barking, “Where are my Fruity Pebbles? I ordered Fruity Pebbles! And why isn’t anyone pouring the milk?” 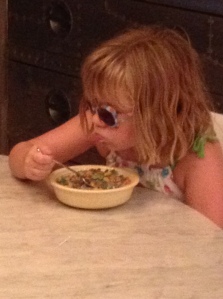 Note that the picture quality is poor since I had to surreptitiously take them to avoid her wrath. Frankly, I’m scared of her.

Spouse has also worked out a whole backstory to her behavior that I find hilarious (and a helpful coping mechanism), namely that she’s an indulged, out-of-control socialite/actress/musician.

He’ll pretend to be Trixie (out of earshot, of course), and routinely provides bon mots like: