I’m not sure why this was the year that I became really, really into camouflage prints.

Yes, they’re trendy now, but they’ve been trendy in the past and I’ve never succumbed.

And since I have not magically morphed into someone inclined to participate in activities such as hunting (ok, maybe urban hunting, which is shopping in my vocabulary), this predilection is entirely new.

It started with these pants:

I ordered these pants after spying them in a Nordstrom ad. The muted print is nice and surprisingly neutral. I’ve been wearing them at least twice per week since they arrived. Another blog suggested pairing them with a striped blue and white button down, which I think would look cute. I have two of those exact shirts, but both have idled in my to-be-drycleaned pile for too long to admit, so I’ve mostly been wearing the pants with a light pink or gray tee, sometimes with an oatmeal colored cotton sweater from the Gap. I haven’t paired them yet with the velvet bee mules. but seeing this picture above reminds me to try this soon.

Around the same time that I ordered the pants, I received notice that my next Stitch Fix was being styled, and I quickly added a request for camo bottoms. While there weren’t any available (which, in retrospect was good since I had these pants on order by the time I got the Fix), this jacket arrived instead:

This camo bomber has proven to be incredibly versatile. I’ve worn it a few times already as a light layer over my favorite Target find of the summer, this dress: 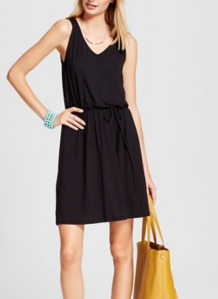 The fabric in the jacket is really soft (Tencel?) and I like the cute zippered pocket detail on the arm:

While two pieces of camo in my wardrobe would have sufficed, I also added these sweatpants:

Alas, these are now sold out, but the cute online boutique that sells them has a lot of other comfy lounge pants in stock.

My final two items were from my recent Gap splurge, where I had a bunch of Gap Cash that was burning a hole in my pocket. 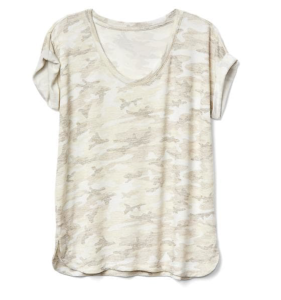 I promise not to wear this all at once.