Our friends P & T invited us over to their house on Sunday, and I gallantly said I would bring a dessert.

Except that I barely ever cook, I didn’t have much time, and I couldn’t think of anything to make.

And then I remembered these candy bar brownies.

I saw this recipe in a newspaper column about five years ago, back when we were still living in Texas.

At the time, it seemed over-the-top decadent for a picnic or potluck, which struck me as being particularly Texan.

These brownies couldn’t be easier (even for me!), and they turn out great every time. You can also mix up the filling, but I am partial to the original recipe.

Here’s what to do:

Here’s a snap from the half-way point: 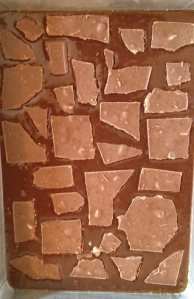 I leave the candy bar pieces pretty large and distribute them so that each brownie will have a bit of candy.

After baking, the candy bars form a truffle-like layer of filling that is absolutely delicious.

Seriously, Papabubble hard candies are so far above and beyond the decades-old butterscotch candies that my grandma kept in a jar when I was a kid that it’s not even fair to discuss them in the same sentence.

Look how gorgeous they are:

Each one is a tiny work of art.

Here’s a well-done video showing how the candy is made:

And another interviewing the NYC owner.

Last night I took MGM (6) and Trixie (5) for some overdue haircuts.

While I drive two hours to a chic but unpretentious salon in a metropolitan area to get my own (relatively boring) hair done, they go to Great Clips.

But they love the lollipops they get at the end of the cut. That’s worth $11 right there.

Trixie was done first and went straight for a butterscotch lollie.

I’ve often wondered what this was.

Dum Dums haven’t changed much since the bank my parents used in the 70s liberally distributed them when you went through the pneumatic tube-equipped drive-through.

And long last, here’s the truth: “Mystery Flavor” arises during a line change-over, when one flavor becomes the next. It’s the tail end of Flavor A combined with the beginning of new Flavor B.

As such, “Mystery Flavor” ever evolves. It’s a practical touch for the company, but a bit of a let down nonetheless.

Here’s the explanation from Mental Floss:

Some Dum Dums have wrappers with question marks where the flavor is normally printed. This was a marketing idea that made the production process run more smoothly and made eating Dum Dums more fun. The Mystery Flavor pop is a mixture of two flavors that come together when the end of one batch of candy meets the beginning of the next batch. Rather than shutting down to clean out the candy equipment between flavors, Spangler turned lemons into lemonade and made pops out of the combination of flavors – the tail end of the old, and the beginning of the new. The candy lines keep running continuously, and the Mystery Flavor pops are a surprise treat every time.

P.S. I’d still vote for “Cream Soda” as my favorite.

P.P.S. The Dum Dums site reports “Bacon” as their most requested new flavor.