Our kids have an extended school year, so summer vacation doesn’t officially start until next week.

MGM (6) had one last book report to complete, and after much teeth gnashing (mostly on my part) and negotiation (his), he settled on reading this classic:

Except – it hit a bit too close to home.

The report required answering a few basic questions, like who was the main character and what was the problem or conflict in the story.

The main characters were identified as Max and the Wild Things.

The problem within the story was that Max was too wild and got sent to his room, where he created an imaginary world and eventually became King of the Wild Things.

At this point MGM’s eyes got huge and he said, “I think this book is about me.”

And that, my friends, is why this book is a classic. I wonder how many other six year olds can relate.

P.S. I was also hoping this epiphany would spark a life-long love of books, but MGM quickly moved on to building – and destroying – Lego structures in his room.

MGM (6) had to make a Venn diagram about the work that firefighters and police officers do.

I’m not quite sure what to think of the results. 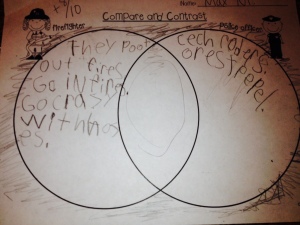 What police officers do:

Apparently, there is also no intersecting of duties. No helping people. No wearing uniforms. No riding in vehicles with sirens. No performance of heroic actions.